Although silver is extremely scarce in relation to most elements and resources, it is the most plentiful and least expensive of various precious metals (compared to gold, platinum, palladium, and rhodium). Thus silver is the world’s most affordable precious metal and especially over the last ten years this precious metal has gained a larger portion of many investor portfolios.

Historically speaking, for many thousands of years silver has served as a trustworthy store of value, money for day to day transactions, and a vehicle for long term savings and capital formation.

In various languages, the word silver literally means money or cash. For example in French, Spanish, Portuguese, Thai, and Greek.

Nobel Prize winning economist Milton Friedman once quipped, “The major monetary metal in history is silver, not gold.” Most likely he was referring to the fact that in overall historical transaction volumes, silver has served mankind more as money than even gold, most likely given silver’s smaller value and ease of use in tiny transactions.

On the brighter side, there are many positive reasons why silver bullion buyers buy and own silver many believing the precious metal is wholly undervalued today. Silver remains second only to oil in the amounts of products it is used in, with good reasons.

Aside from silver’s consistent usage as a monetary metal, its other diverse uses are in silverware, jewelry, dentistry, air conditioning, water filtration, mirror coatings, solar panels, various electronics, photography, and other applications we will examine further in the silver demand section below.

The following is the world's silver supply and demand data for ten years from 2006 - 2015. Note the consistent deficits in silver supply vs increasing silver demand.

Mankind has mined an estimated 1.5 million tonnes of silver to date. This amount of silver could fit into a 52 meter cube. Unlike gold mining output, which is almost all entirely with us still today, much of these nearly 50 billion silver ounces mined have been used in industrial goods and remains not recycled nor a large portion even unrecoverable at today’s current silver prices.

Given that about 20% of annual silver supply comes from refining and recycling old silver, it could be argued that the true annual addition to the above ground silver supply is around 800 million ounces per year.

According to Thomson Reuters, world silver demand has outstripped annual silver supply levels the vast majority of the past decade. According to the Silver Institute, an overall slowdown in silver mine production is expected to continue.

Total world silver bullion holdings value at less than $70 billion in US dollar terms today, whereas most other major asset classes (stocks, bonds, real estate and even gold) are measured in the many multiple trillions of US dollars.

The all time estimated gold to silver mined ratio is about 8 oz of silver to 1 oz of gold (based on the all time estimate of 1.5 billion tonnes of silver and 186,700 tonnes of gold mined). According to geologists, we find 0.075 parts per million (ppm) of silver vs 0.004 ppm of gold which would give us a naturally occurring ratio of 18.75 but recall too that almost all the silver we mine today is done as a byproduct of other metal mining operations.

For over 100 years now governments and central banks have been actively influencing and even arbitrarily setting the prices and values for silver and gold. As a consequence the over 5,000 year historical average gold to silver value ratio of about 15 has ballooned at times to a ratio as high as 100, now nearing a ratio of about 70.

Although not transparent nor published like Official Gold Reserves, government silver reserves are not deemed to be a large portion of the current silver supply (unlike central bank gold reserves which constitutes almost one-fifth of all the gold ever mined, under direct government ownership).

About one quarter of 25% of annual silver demand is used in silver jewelry and eating utensils. Silverware has long been prized for its brilliant luster, germicidal properties, and easy malleability for conducive for silver artisans.

Silver’s larger industrial role can be an impetus for downward volatility and spot price sell offs during economic downturns, as futures contract trader logic assumes less products will be made during recessions. Bearish cases for industrial metals like silver can quickly turn on their head with central bank intervention and monetary accommodations (i.e. from 2008 crash to QE 1, QE 2, etc. leading to $50 oz silver in spring 2011).

Without silver our modern way of life would be hard to maintain. The amount of industrial applications for silver is surpassed only by crude oil itself. Silver has thousands of modern-day industrial uses for which supplementation with other metals is unlikely given silver’s current price point and its superior elemental attributes.

Other industrial silver uses and applications include silver in the production of various:

Silver’s industrial demand in various cases may be inelastic to price spikes due to tiny trace amounts of silver utilized in many of the aforementioned industrial applications. Even if silver were to be priced many multiples higher than today, smartphones and other electronics will most likely still be using silver in their production. For instance a computer generally only contains about 1 gram of thinly placed silver coatings while a cell phone typically uses just 0.2 grams of silver. Any additional cost per unit due to higher silver prices would likely be passed to consumers as opposed to supplemented with inferior metals.

One of the fastest growing and most intensive industrial applications for silver is in the solar industry. The typical solar panel today actually uses about 2/3rds of a troy ounce of silver (about 20 grams).

Industrial silver applications are growing and shall remain essential to our modern way of life.

Investor .999 fine silver bullion buying now accounts for roughly one quarter of 25% of annual silver demand. This segment of silver demand growth has exploded over the last decade much in part due to the 2008 Financial Crisis (where the median middle class American lost over 40% of their wealth on paper).

The internet has also further allowed average investors to learn fundamental investment factors for silver. Physical silver investment buying has surged over the past decade, accounting in 2006 for just over 5% of total silver demand to almost 25% in 2016 alone. 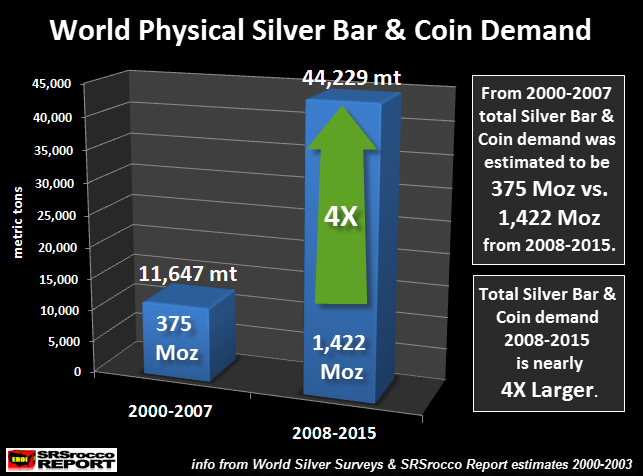 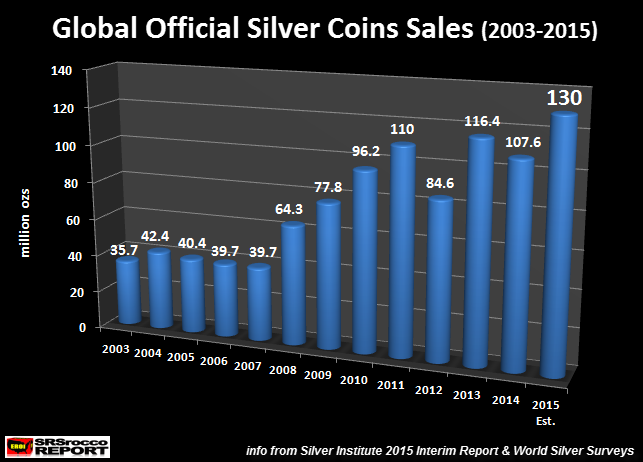 Since the 2008 Financial Crisis, many respective private and government silver mints have consistently reported record silver bullion round, bar, and coin sales.

Commodities like silver (as well as gold, oil, palladium, platinum, wheat, coffee, cotton, and other items) all have futures contracts listed on various futures exchanges throughout the world. Perhaps you have seen certain acronyms like the NYMEX, TOCOM, CME Group, CBOT, SHFE, and COMEX etc.

Futures contracts have been used in one form or another for hundreds of years. The original intention of futures contracts is to give producers of commodities (like silver miners for example), end users (Silver refiners and bullion dealers for example), and price speculators (those who simply trade on futures exchanges for short term gains) ways to respectively manage price risk, buy and potentially take actual delivery of the real world goods, or now more so than ever simply speculate and place bets on a commodity’s future price rise or fall.

The entities who exert the largest influence on the current silver spot price are for the most part not actually exchanging physical silver, but instead trading derivative contracts to highly influence what the real world’s physical silver price is.

For example, it was estimated as recent as 2014 that the annual silver market accounts for a gargantuan $5 trillion in US dollar trading volumes. Note again that the world’s annual physical silver bullion supply would have been valued at about $20 billion US dollars in 2014. This implies an annual supply versus trading volume leverage of 250 multiples.

If a large enough percentages of the world continue to growingly demand physical delivery of their silver bullion, the current highly leveraged fractional reserve future markets may be forced to adapt to a situation where deliverable physical silver bullion indeed drives the price of silver ahead. 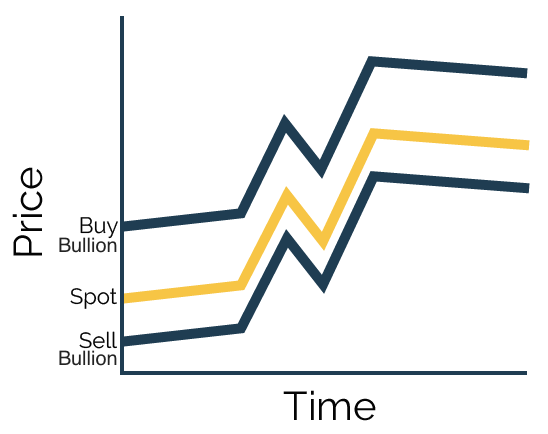 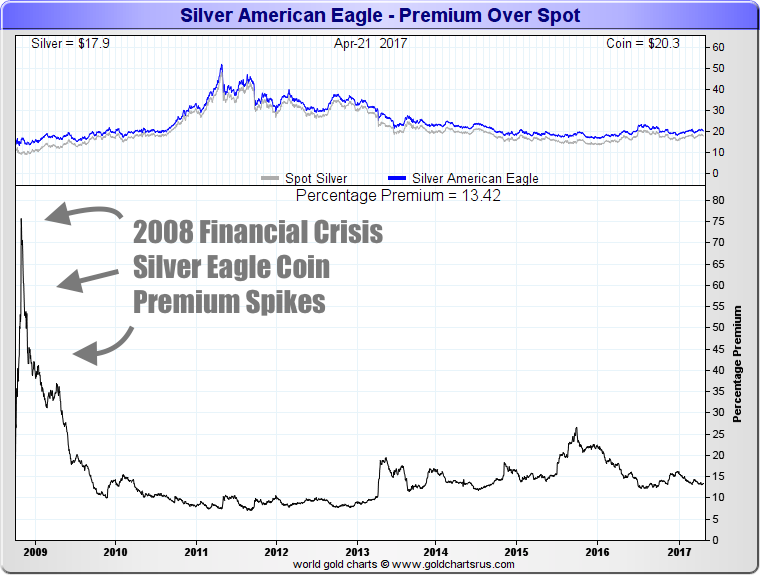 Yet note too that during times of silver bullion market disequilibrium (like during the 2008 Financial Crisis), silver bullion product prices available for immediate delivery may spike higher (both on the sell and buy side) to levels both hovering above the world’s fluctuating silver spot prices.

In summation, the silver spot price relation to deliverable physical silver bullion generally functions like so:

More and more investors around the world appear to be confirming Milton Freedman's words, “The major monetary metal in history is silver, not gold.”