For the majority of the last half century, platinum has sold at price premium higher than even gold. Yet since 2014, platinum prices have fallen significantly lower than gold.

Platinum is indeed rare with an estimated earth's crust concentration of 0.005 parts per million (ppm). In comparison silver is found in 0.075 ppm while gold is found at 0.004 ppm in the ground. To give you a clearer understanding, if we convert platinum’s parts per million rarity into time, we would find 1 minute of platinum in just over 380 years. For gold it would be more than 450 years and for silver over 25 years respectively.

Although gold is slightly more rare in the Earth than platinum, human beings have been mining gold for many thousands of years. Platinum was only scientifically discovered a few centuries ago. Thus above ground supplies of gold bullion dwarf today’s refined and available physical platinum supplies.

Platinum is so rare that all the platinum ever mined in human history could fit inside of an average United States citizen’s garage or in a pure platinum cube with 8 meter sides. 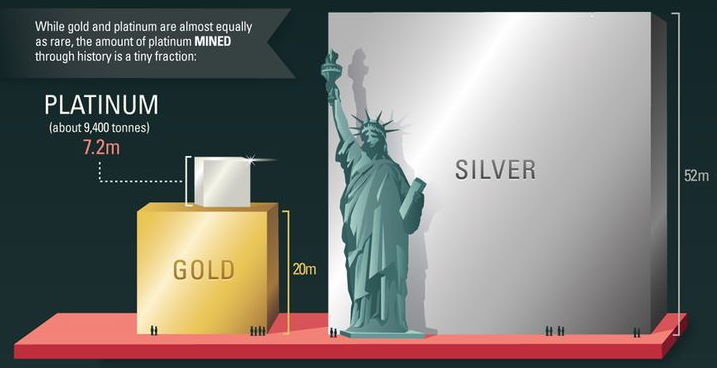 The platinum melting point of 1773°C or 3224°F is very high compared to other metals and a large reason why it was only recently discovered by alchemists. The high melt point of platinum caused Spanish new world explorers to regarded it (and other high melt point, noble metals such as palladium) as nuisances in their quest to find new supplies of gold and silver.

Humans have only recently become able to burn a fire hot enough to melt, refine, and identify platinum properly. Platinum was so looked down upon in recent history that it was often used in silver and gold coin counterfeits in the 18th and 19th Century.

The element platinum is the least reactive metal and it has extraordinary resistance to corrosion and tarnish. Platinum is highly ductile metal making it the ore most able to be stretched into a wire without breaking.

Platinum enjoys a higher density than gold and silver. This means that platinum bullion items take up less space when stowed away than either of the two aforementioned precious metals.

As recently as 2016, bullion industry reports show just over 2,000 metric tonnes of fine .999 platinum remain above ground. While capital flows for platinum as an investment have increased double digit multiples since the beginning of the 21st Century. 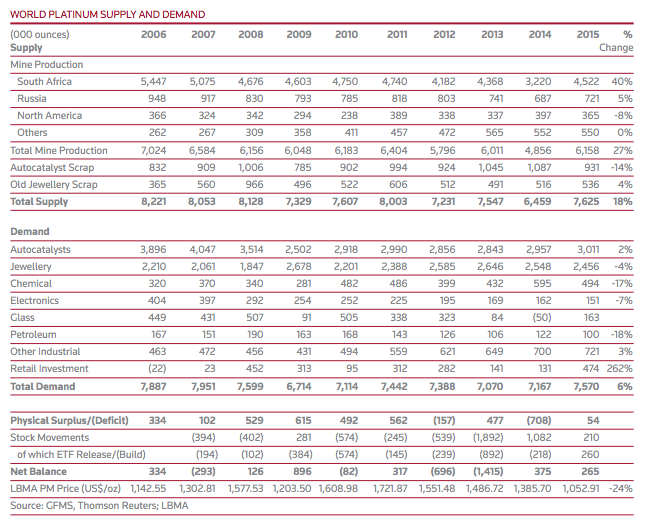 Over 70% of all new mined platinum supplies come from South Africa where mining labor strikes, instability, and turmoil have become the normal state of affairs. Platinum’s supply is thus much more vulnerable to both mining and political disruptions compared to other ubiquitously mined and sought after precious metals like silver and gold. 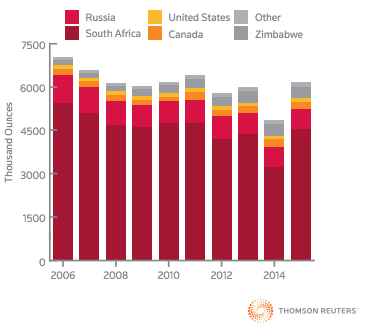 About 90% of the fresh world’s platinum supply is dug up from just 4 major mining sites. Three of the world’s major mine sites are located in South Africa while the other remaining major platinum mine resides in Russia.

Since 2006 peak platinum production, Russian and South African platinum supplies have been declining due to rising costs and lowering ore grades. Much higher platinum recycling supplies over this timeframe have helped meet and offset growing market demands. 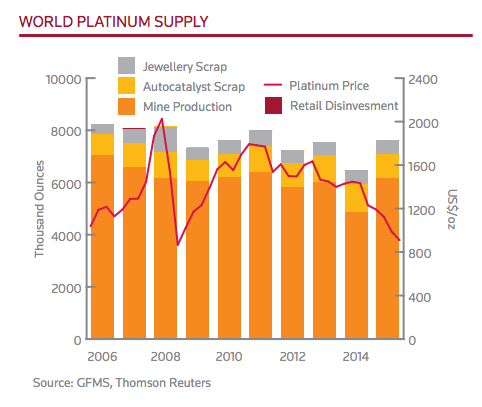 Since the year 2000, annual worldwide demand for platinum has averaged just over 7 million ounces per year. 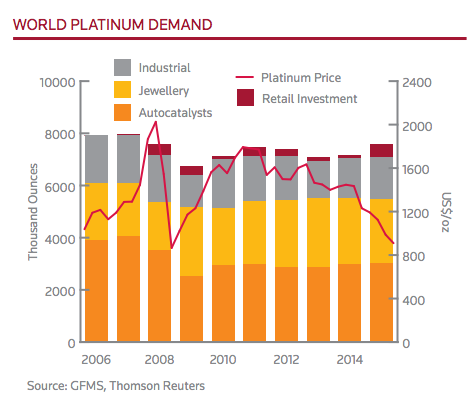 The next largest sector of platinum demand is for platinum jewelry especially savored due to the platinum being highly resistant to tarnishing and warping. 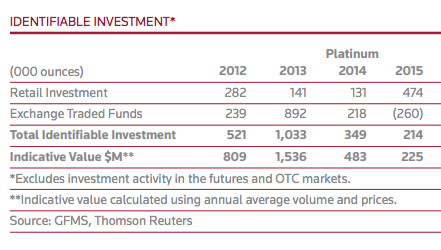 The smallest of the four segments of the world’s platinum demand comes from the platinum investment sector. Platinum investments range from counter-party risk laden platinum proxies like ETFs to actual physical platinum bullion coins and bars you can buy and own outright for the long term which we offer via fully insured discreet delivery here at Kitco Metals.