Palladium bullion as an investment is relatively new phenomenon when compared to the adornment and monetary history of silver or gold. 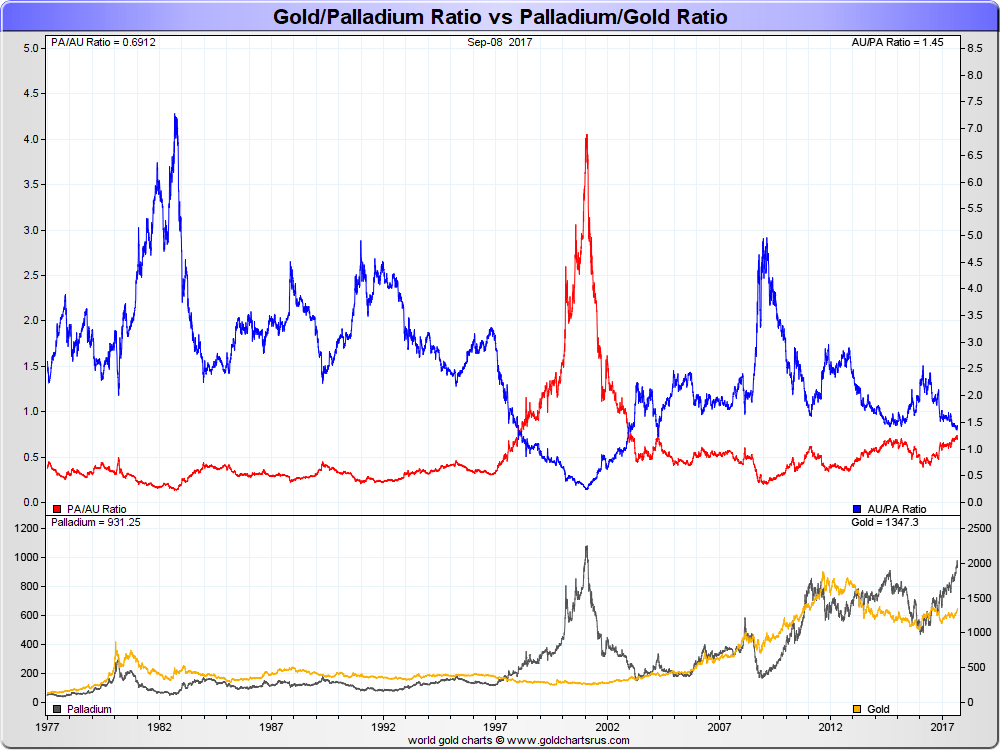 The all time palladium price record occurred near the end of the Dot-com bubble on January 26, 2001. 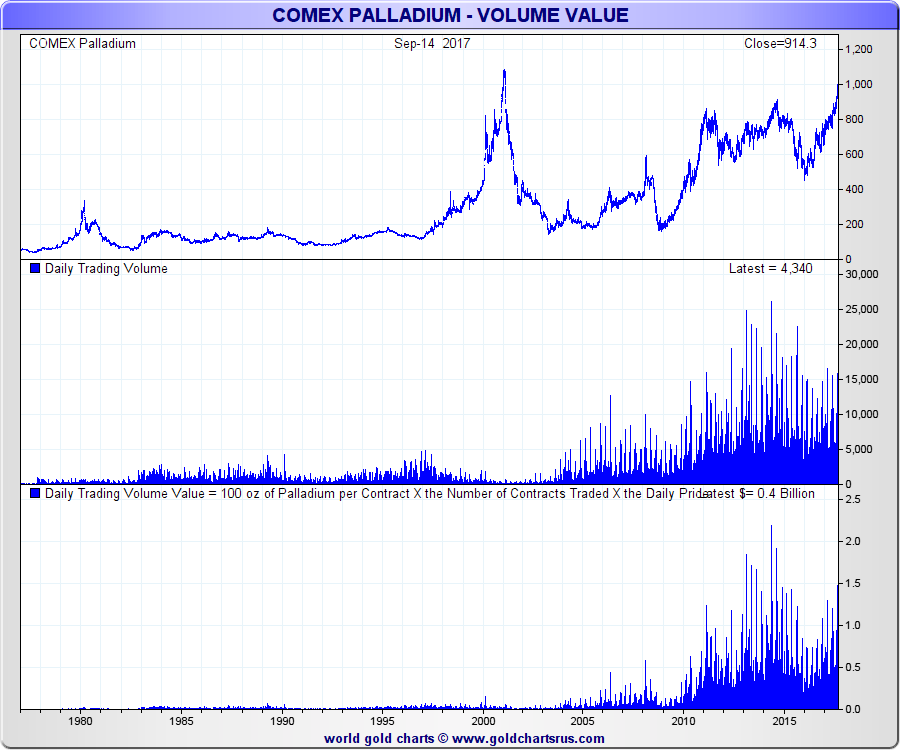 Palladium is a very rare precious metal with smaller above ground supplies than silver, gold, and even platinum.

The element palladium has an estimated Earth's crust concentration of 0.015 parts per million (ppm). In comparison, silver is found in 0.075 ppm, platinum at 0.005 ppm, while gold is estimated at 0.004 ppm in the earth’s crust.

To give you another perspective, if we convert palladium’s parts per million rarity into time, we would find 1 minute of palladium in just over 125 years. For gold it would be more than 450 years, platinum over 380 years, and for silver 25 years to one minute of respective precious metal recovery.

Although gold is nearly four times more rare in the Earth’s crust than palladium, human beings have been mining gold for many thousands of years. While palladium was only scientifically discovered a few centuries ago due to its very high melt point ( 2,831°F / 1,555°C ), consequently prior generations of alchemists were not able to easily melt, refine, and solely isolate palladium nor appreciate its high value essence.

This high melting point of palladium was one reason Spanish explorers in the new world regarded it (and other high melt point noble metals like platinum) as mere nuisances in their quest to find new supplies of gold and silver in Americas. They simply did not have the technology to burn a fire hot enough to identify and isolate palladium properly. 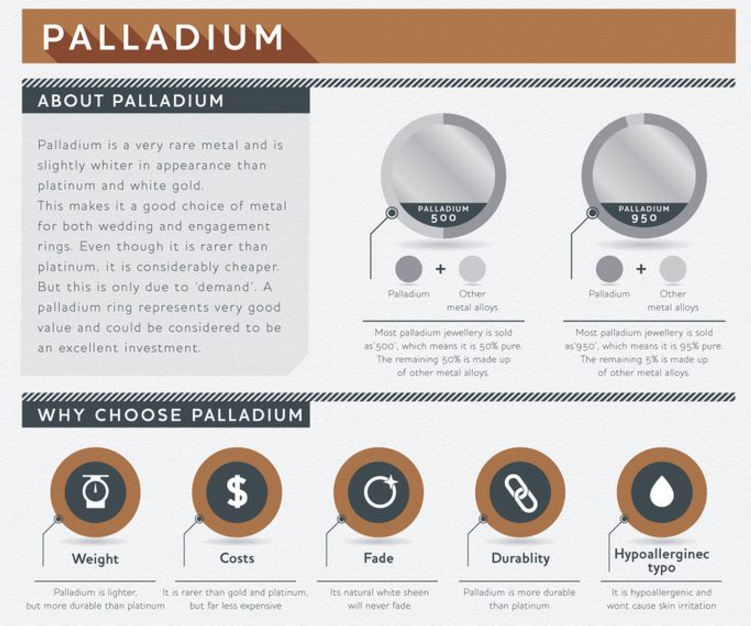 Officially discovered in the early 19th Century, historical mining data shows just over 6,000 tonnes of palladium have ever been mined by mankind. Throughout history about 230 times more silver and 30 times more gold have been mined compared to palladium ore.

Over the past decade, capital flows for palladium as an investment have increased since the inception of palladium exchange traded derivatives yet still virtually all of today’s palladium demand remains for industrial uses. 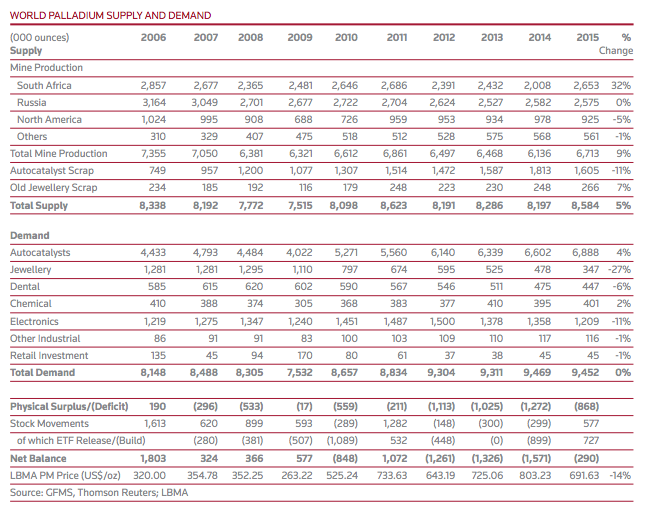 Both nations have had major palladium supply disruptions this 21st Century. 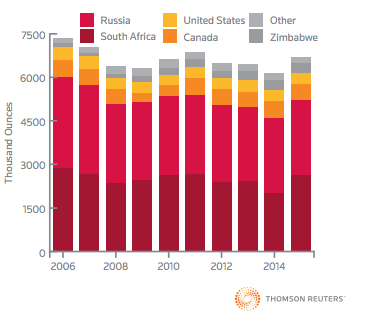 Palladium supplies are very vulnerable to both mine production halts (i.e. political and mining labor disruptions) especially when compared to other more widely mined precious metals like silver or gold.

By early 2002 Russian palladium supplies were again exporting and the US dollar spot price of palladium had fallen by more than 60% from its prior year’s all time record price. The Ford Motor Company was forced to write-off $1 billion US dollars of the value of the precious metal stockpile it had acquired without hedging its price with derivatives.

According to Thomson Reuters, palladium has been running supply deficits since the year 2007. 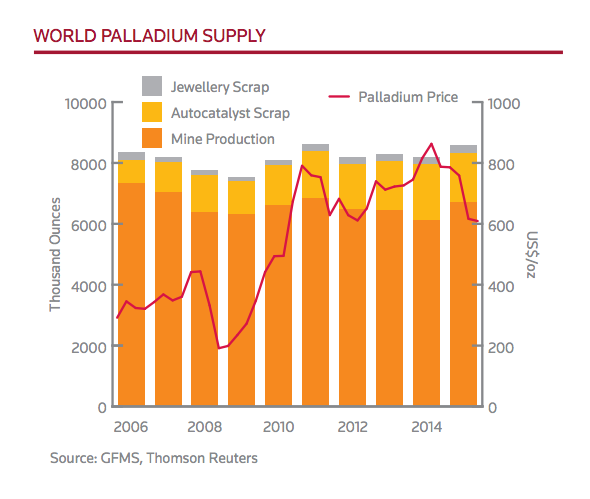 World palladium demand is mainly driven by the 6 following sectors.

The vast majority (about 70%) of palladium demand comes from the car industry’s catalytic converter intended to help reduce car and auto engine emissions.

The next largest sector (about 10%) of palladium demand is for electrical industrial usage in semiconductor applications, platings, and fuel cells for batteries.

Chemical and dental applications make up another 10% of today’s annual global palladium demand. 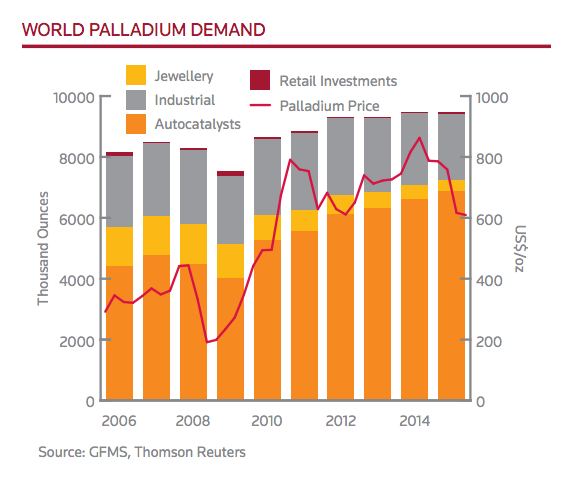 Today’s annual worldwide demand for palladium has averaged at just under 10 million ounces or around 300 metric tonnes per year. Yet palladium has been running supply deficits since the year 2007 according to Thomson Reuters data. 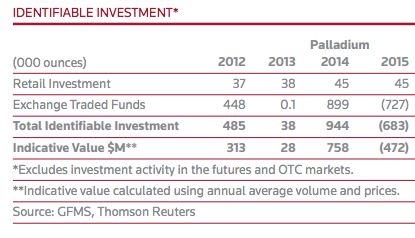 Palladium investments range from electronic derivatives in palladium exchange traded funds (platinum ETFs) to actual physical palladium bullion coins and bars you can buy and own outright for the long term via fully insured discreet delivery from us here at Kitco Metals.

Since the 2008 Financial Crisis lows of $173 oz palladium, there has been a steady increase in palladium prices coupled with an increase in the numbers of palladium bullion items being sold to the investing public.

It is quite common for investors to buy physical palladium bullion online with the intention to take physical delivery in order to better diversify risks to their wealth and investment portfolios.