For thousands of years gold has served mankind as a versatile financial and monetary asset.  If used properly, gold can help insulate and insure individuals against loss of financial wealth while and simultaneously provide them with opportunities to greatly increase their wealth through intelligent gold ownership and allocation.

Since the year 2000, there has been a pronounced increase in gold’s value priced in every national currency issued by a government. It could be argued that we stand in the midst of the greatest gold bull market the world has ever seen if measured in sheer size of trading volumes and the numbers physical gold ounces being actively mined, refined, bought, and sold. Between government central banks and individual investors, the amount of gold bullion being purchased as a trusted store of value for the long term is unprecedented.

Today most long term gold bullion buyers buy and own gold to diversify their wealth. These investors understand the importance of not having all their wealth denominated in just one or two fiat currencies like the US or Canadian dollar for example. All national currencies rise and eventually fall. Think about history, the only currency regime that has not failed is the current one. International financial regimes and rules have and will again change. Many bullion buyers know this and diversify the nature of their wealth, preferring not to hold all their assets denominated by a single currency or lone point of potential failure.

Over the past 50 years the world has witnessed many varying equity market crashes and bear markets spanning from the west to the eastern nation states. Recently we have also witness an extended period of time where interest rates have been negative or virtually zero. It is not surprising that when backtested close to 50 years, gold could have played a much more prominent role (27-30% of a portfolio’s allocation) in wealth preservation than most financial commentators may have suggested.

During and following the financial crisis of 2008, the trend of online bullion dealers both buying and selling gold coins and gold bullion bars to the investing public has also increased substantially. It has become quite common for investors to buy and own gold coins or gold bullion bars in order to better diversify risks to their investment portfolios.

Civilizations and world history have been dramatically shaped by the pursuit of gold. This precious metal has a more than 5,000 year history used in precious adornment, as money, and as a dependable store of value. Today the world appears to be relearning why gold was, and still is, the underlying bedrock of global finance.

Gold remains one of the only default proof assets available to investors. Unlike virtually all other asset classes, gold (and other physical precious metals) cannot be made worthless by the failure of counter-parties. Other than a risk of theft, physical gold will never become worthless. Regardless of what the world’s future monetary system is, gold’s growing role in medicine and in aerospace alone ensures its future consumption.

In this gold fundamental page we will cover basic information on gold bullion’s supply and demand factors. We will also elaborate on gold spot price discovery and how gold bullion prices function now and possibly into the future.

It is estimated that if we took all the gold ever mined by mankind and placed it in one place, it could fit inside a cube of 25 meters. Picture a tennis court, an olympic sized pool, or 1/3 of the Washington Monument filled with the world’s all time above ground gold supply.

Although the gold market remains very opaque, experts generally estimate all time above ground gold stocks stand at about 186,700 tonnes of gold ( about 6 billion troy ounces ).

Aboveground gold supplies grow at just over 1.5% per year which is coincidentally about the same percentage growth of the world’s population each and every year.

The annual gold supply is now hovering above 4,000 tonnes a year with about 70% coming from gold miners and the remaining 30% from recycled gold coming back into the gold supply.

Given that 30% of annual gold supply comes from refining and recycling old gold, it could be argued that the true annual addition to the above ground gold supply is around 3,000 tonnes per year ( close to 100 million ounces ).

Unlike industrial silver or other scarce industrial precious metals, over 90% of the gold which exists above ground eventually gets recovered, recycled, and finally put back into above ground gold inventories. There are a few industrial gold applications that do however exhaust gold and go unrecovered which we will examine in the coming gold demand section below.

Almost 1/5th of all the gold ever mined is currently still owned and hoarded by government central banks alone. Some traditions never change as from Fort Knox, Kentucky to government gold vaults in China, nation states have owned and stored gold bullion for thousands of years before even the invention of fiat currencies themselves.

Gold mining today occurs on every continent in the world today except Antarctica. Gold mines vary in scale, formation, and type.

The following chart shows annual continental gold production from 1930 to 2013.

Gold is mined in various countries around the world. Currently the largest gold mining nation is China, interestingly the country does not export any of the some 15% of the world’s annual gold mine supply it alone generates. Many industry experts report and further speculate that China (as well as many other eastern nations) have been actively building their gold reserves with the aim of having more influence in the world’s next international monetary system design and functionality.

According to gold mining industry experts, the gold grams yielded per tonne of Earth mined by the world’s largest gold mining operations has significantly fallen over the past decade.

It is becoming harder for gold miners to locate and profitably operate high yielding gold mines in order to meet the world’s growing demand for gold.

Will the supply of physical gold bullion be large enough to meet world demand in the coming years or will its price have to be further adjusted to offset an over or under supply of gold?

“Money is gold, and nothing else.”

That was according to J.P. Morgan in the year 1912 AD, as he testified before the US Congress. Reading the correspondence it appears Mr. Morgan was helping to illuminate the difference between bank credit and bonafide specie money.

What we humans define as money today is most certainly debatable and often hotly debated. Yet perhaps the most critical attribute of good dependable money, is that it not only reliably hold its value not merely for tomorrow or next year, but for generations into the future. Public record and historical fact prove gold has successfully served mankind as dependable money as far back as 600 BC, when it was first struck in Lydian coins.

Perhaps you have heard the expression, ‘the more things change, the more they stay the same’. In annual gold demand, that expression certainly applies to gold’s continued and yet growing use in jewelry and as a safe haven store of value.

Gold’s current most voluminous demand factor still remains its use in jewelry and for adornment ( about 50% of yearly demand ). Indian and Chinese citizens make up the largest block of gold jewelry demand accounting for more than half of the yearly gold jewelry demand the world over.

By its natural characteristics the element gold offers superb malleability, conductivity, biocompatibility, and resistance to corrosion and destruction. Gold can be hammered into leaf sheets so slim and inexpensive that it can be used as decorative wall paper or in extravagant food dishes. A single troy ounce of gold can drawn into a wire so fine that is could stretch up to 80 kilometers in length.

The metal’s impressive conductivity and resistance to corrosion also make it the material of choice for high-end electronics manufacturing.

Increasingly gold is also being utilized in various high-tech applications including the space industry, in solar fuel cells, and to diminish harmful automotive emissions. The number of new patents created relating to gold nanotechnology suggests many new applications using nano-gold are in development as well.

With all the varying uses for gold (e.g. jewelry, technology, medicine, or held as a store of value), different sectors of the gold market remain poised to rise in prominence at different moments in future economic cycles. A self-balancing nature for gold demand affords the metal a consistent sustained base level of value and the potential to increase substantially soon.

The following chart illustrates the explosive growth in paper asset values to gold investment holdings since 1980 to 2014.

Contrarian investors have and should take note that the world today is reaching unprecedented levels for both public and private debts, loans, and equity valuations.

“Money is gold, and nothing else.”

Commodities like gold (as well as silver, oil, palladium, platinum, wheat, coffee, cotton, and other items) all have futures contracts listed on various futures exchanges throughout the world. Perhaps you know of or have seen certain future exchange acronyms like the NYMEX, CME Group, CBOT, SGE, and COMEX etc.

Futures contracts have been used for hundred of years. The original intention of futures contracts is to give producers of commodities (like gold miners for example), end users (gold refiners and bullion dealers for example), and price speculators (those who simply trade on futures exchanges for short term gains) ways to respectively manage price risk, buy and potentially take actual delivery of the real world goods, or simply place bets on a commodity’s price coming rise or fall. 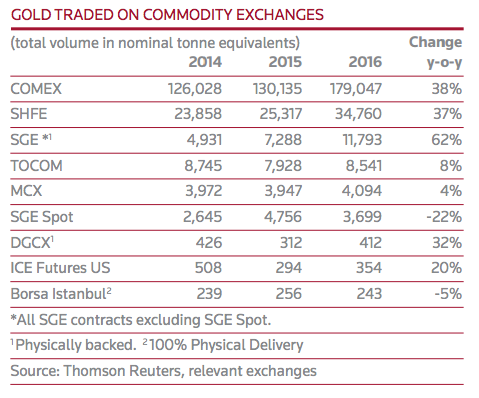 Those who most influence the current gold spot price are for the most part not actually exchanging physical gold, but instead trading derivative contracts to highly influence what the real world’s physical gold price is.

Other than the Shanghai Gold Exchange (SGE) all other gold futures markets are highly leveraged fractionally reserved gold exchanges. This means they trade many more times the volumes of gold futures contracts with a small percentage of actual deliverable gold bullion owned and sitting in warehouses.

For instance, in 2015 alone the world’s gold futures markets traded contracts representing many multiple times more gold than humans have ever mined throughout history (186,700 tonnes). Far less than 1% of these traded gold futures contracts (excluding the SGE) are settled in physical delivery of gold bullion. In summation, the price for gold is currently mostly influenced by short term price speculators trading futures contracts, political and economic events.

If a large enough percentage of the world starts demanding physical delivery of their gold bullion, the current highly leveraged fractional reserve future markets will most likely be forced to adapt to a situation where deliverable physical gold bullion indeed drives the price of gold.

The gold bullion products which are available to purchase from gold bullion dealers are virtually all priced per ounce of gold either at basis points or even percentage points above the fluctuating gold spot price given costs associated with refining, manufacturing, minting, marketing, hedging, and warehousing the respective gold bullion products.

Conversely when selling gold bullion to retail dealers, gold bullion products will typically yield a sell or bid price at or just below the fluctuating gold spot price.

During times of gold bullion market disequilibrium (like during the 2008 Financial Crisis), gold bullion prices for products available for immediate delivery may spike higher (both on the sell and buy side). During financial crisis it is possible to see both bullion bid (sell) and ask (buy) prices increase above the world’s fluctuating gold spot prices.